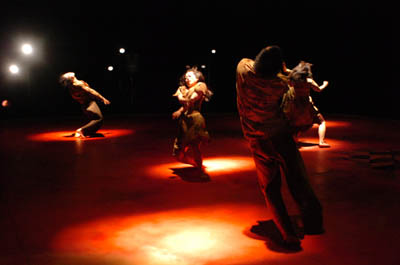 "." has been applied by the spam mail measures before the mark of @. Please cancel "." when you transmit and transmit.

j.a.m.Dance Theatre was formed in 2002 by performing arts graduates of Kinki University, and sculptor Tamotsu Suemoto.
They performed at the Yokohama Solo×Duo<Competition>, NEXT NEXT4, KAVC Challenge Theater, dB physical Arts Festival "Osaka BABA", and other events in Kansai area as well as in Tokyo and Yokohama.
Since 2005, they have been chosen as a residential artist for AI HALL "Take a chance project", to be given opportunities to create new pieces.
They have also been invited to perform at dance festivals in other countries such as Korea and Portugal.

Living in the moment, taking care to pay attention to one's own senses, creating works which spark imagination in the audience and those involved in the production.

To tour overseas, and create and perform works with artists from various genres （at various places, including non-traditional locations like parks, etc.）.

Play of the programs video

JCDN OFFICE
"." has been applied by the spam mail measures before the mark of @. Please cancel "." when you transmit and transmit.